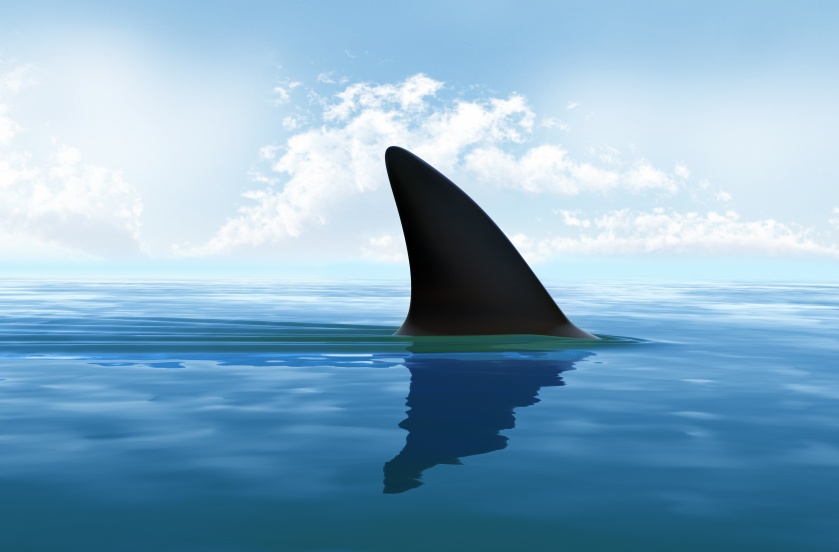 Hell, even falling coconuts are more likely to boot you out of this mortal coil than the love bite of a big fish. Yet, I know many people personally who are utterly terrified of sharks. I even had a girlfriend once who made a point of waiting to see whether the water was safe before getting in herself. And she did this by stationing herself on the beach while I cavorted around in the waves for a good ten minutes. When I didn’t disappear in a frothy explosion of blood and surf, she would sidle surreptitiously in and make sure to stay within two metres of the shore.

I dumped her shortly after. 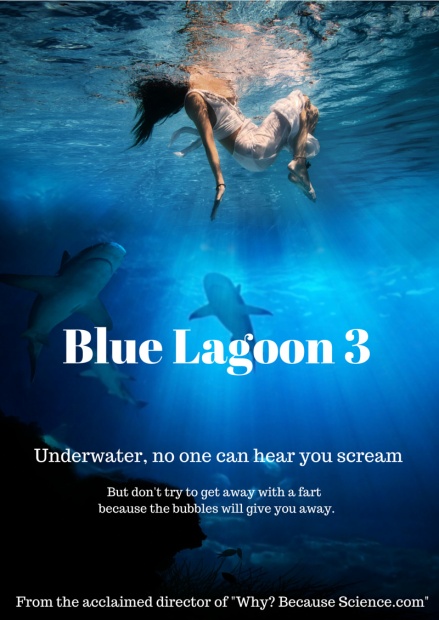 Most of what we know about sharks comes from their portrayal by movies such as Jaws (1, 2 and 3), Open Water, Deep Blue Sea and a smattering of awful, completely scientifically inaccurate low budget films, a more recent one being the truly horrendous Sharknado and now Sharknado 2. Sweet Lord, as if one wasn’t enough! I can assure you that the last thing on a shark’s mind while being flung through the air by freak atmospheric whirlwinds is food.

True, a horror film about head bludgeoning coconuts probably wouldn’t clean up at the box office, but sharks really do get a bad rap from our insatiable appetite for being terrified in the comfort of our own homes while shovelling fistfuls of popcorn into our face holes. The fact of the matter is, sharks really aren’t that into you! And they’re as misunderstood as men with moustaches.

A hairy lip does not a paedophile make.

Shark Attack! Or Is It?

My good friend Christopher Reeves – marine biologist by day, superhero by night – raised this incredibly exigent point during one of our many intellectual and totally debauched conversations. Rather it was an exercise he regularly brings up with the bright volunteers that help out at the Seymour Marine Discovery Centre at which he works in Santa Cruz, California. He asks his students to close their eyes and imagine swimming in a cold, dark ocean and I’m going to ask you to do the same right now.

Imagine the feel of the cold salty water gripping your legs, arms and torso and the yawning depths of merciless dark seawater beneath you. A shark is nearby. The hairs on your neck stand up and an atavistic fear clutches at your breast. Imagine the shark: its lines, its inky black eyes, its snout, its rows of jagged, broken teeth.

Did the shark you pictured in your imagination look like this?

I would put my money on the vast majority of your answers being “yes”. This is a great white shark… the one made famous by Peter Benchley’s bestselling novel, Jaws, and later by Steven Spielberg’s 1975 film adaptation. MOST of the subsequent pant-soiling movies made about these fish are based upon the man-eating rampages of this very same species. So, it’s no wonder that our fear of sharks is not actually of the group as a whole, but specifically of great whites. It’s the reason they’re also referred to as “white death.”

In reality, the great white is only one of more than 470 different species of sharks in the oceans that comprise 70% of our planet’s surface. And these species are as diverse in habitats, diets and vocations as the crowds that make up a gay pride march. Great whites are amongst the largest species we know of, but sharks come in all shapes and sizes. Many species could easily fit in a paddle pool or even in a fish tank, while the biggest sharks – the whale shark and the basking shark – don’t even eat big fish or seals! Like baleen whales, they trawl the ocean with their mouths wide open, filtering the water for tiny plankton, crab larvae, krill, squid and micro-algae.

These massive creatures are, like a vegetarian zombie, slow moving and completely disinterested in eating humans or any other large, fleshy animal for that matter. Braaaaains. That is, unless you were stupid enough to hang out near the mouth of a whale shark, in which case sheer bad luck would see you gagging the poor creature. In any case, you’d drown long before you were digested and I’m guessing that’s probably the more favourable option.

On the other end of the size spectrum is the dwarf lanternshark, which is the smallest shark we know of according to the ReefQuest Centre for Shark Research.The dwarf lanternshark is thought to be the smallest species of shark in the world. I say “thought” because not even humans are arrogant enough to assume that every single species has been discovered and given a place into our taxonomy system. This particular shark lives along the upper continental shelf off of the coast of Venezuela and Columbia and at maturity, reaches a length of around 17 cm (± 6 inches). 6 Inches may be a whole lot of fun in the bedroom, but it’s certainly not going to send bloodied limbs flying in every which direction.

Lanternsharks produce light from tiny pores in their skin, which causes them to glow beautiful otherworldly colours. See? Size doesn’t always count. Pushed really, really hard, a lanternshark could probably give your toe a nip or at the very least a nasty suck, but they’re certainly nothing to be afraid of. In fact, they’re probably utterly terrified of you and so they should be. Ruthless overfishing of the Caribbean has put these sharks and many other species like them on the endangered list.

Why Do Sharks Eat Humans Then? 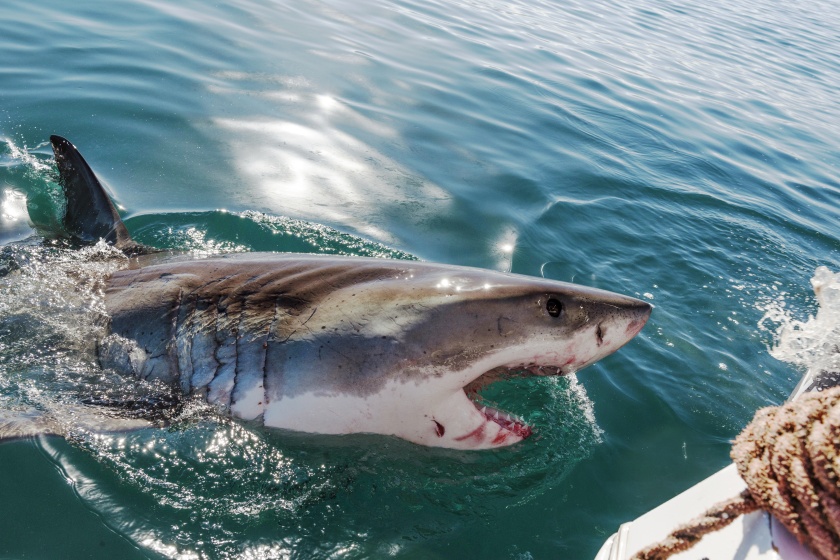 If you were a seal, a fish or a very unlucky seagull, you’d have every reason to get nervous around great white sharks or other similar carnivorous fish. Of course, sharing the water with a large predator would make even the most masculine of men scream like a four-year old girl, but the point is that we are not sharks’ natural prey. Shark attacks aren’t attacks at all… rather they are “accidents”. Like going on a second date with a guy who spends the whole evening talking to your boobs.

Sharks do make mistakes occasionally and appearances can be deceiving. A thrashing wetsuit-clad surfer on a torpedo-shaped board can quite easily pass for a delicious seal, so can you really hold them accountable for the gore that follows? At least we can blame alcohol for our poor decision-making. Sharks, will take a chomp, realise they’ve been duped and then tend to swim off or around in confusion. This is why so many shark bite victims have escaped with their lives.

Trust me. If an apex predator weighing more than 2,000 kg and having more teeth than a love-struck Tom Cruise wanted to eat you, it would. Consider your arm or leg to be a small sacrifice. An hors d’oeuvre.

So What Do We Need to Know About Sharks?

There are many hundreds of different species of sharks, but only a tiny handful have been known to take the occasional bite at a human being. Since larger sharks don’t hang around heavily populated beaches to indulge in easy feeding, we can only assume that these very rare events are cases of mistaken identity. We are simply not on the menu.

Does this mean that we don’t need to be afraid? Yes… but that’s not a license to be stupid either. Just because bears, wolves and other large predators don’t normally eat humans doesn’t mean you can go cavorting naked around the wilderness with a rasher of bacon strapped to your pink bits. And the ocean IS one big wet wilderness.

Sharks do not hunt human beings. They aren’t ruthless killing machines out to “get” you. They deserve much more understanding, far more respect and certainly far less blind fear and discrimination. Sharks are magnificent, powerful creatures and incredibly diverse and successful as a group. 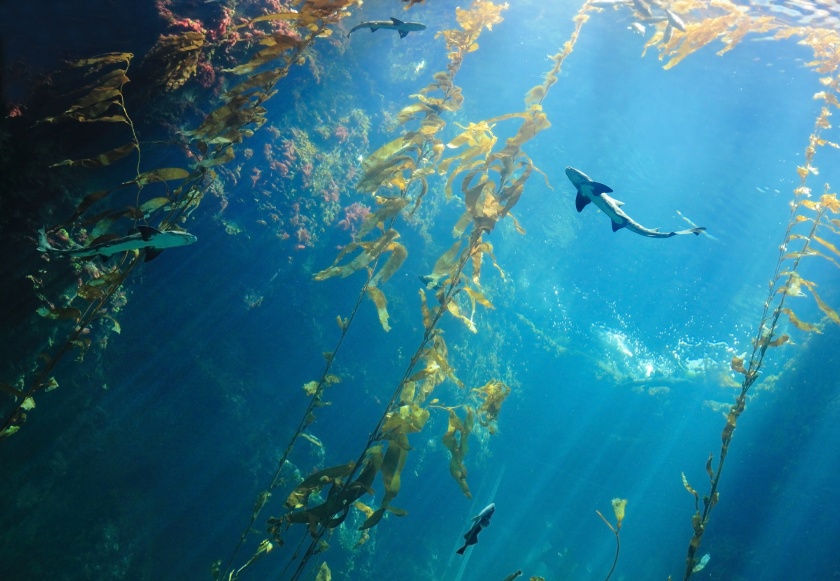 You are more likely to die from opening a bottle of champagne than by being eaten by a shark. Personally, I’d choose the shark… No one wants “died tragically from flying champagne cork” on their headstone and you didn’t even get to drink the champagne first! Choking, tripping, wind (the weather-related kind), bees and ANTS claim more lives per year than sharks. You love dogs and will readily walk up to one in the park for a scratch and a cuddle, but there are 20 canine-related deaths every year in the United States compared with sharks, which only claim one life every TWO years, according to the endless wisdom of National Geographic News. Hell, even cows pose a greater threat to human safety than sharks!

Sure, there are more cases of shark bites annually (16 in the U.S.) than there are actual fatalities (one every two years), but this is testament to the fact that they don’t like eating us. In most cases, a shark will leave you alone once they find out that you aren’t their type and you can’t say the same for tenacious love-struck human beings.

4 thoughts on “Sharks – They’re Just Not That Into You”