It IS Your Fault

What do werewolves and your girlfriend have in common?

Every 28 days, they mutate into a towering, hirsute, slobbering, howling tyrants of canine rage. Werewolves devour flesh, blood and bone. Your girlfriend devours your ego and sense of self-worth. That’s right. Your beautiful petite girlfriend… The very same creature that kisses you so tenderly, coos over you when you’re sick, tolerates your flatulence, laughs at your stupid jokes and makes you feel like a hybrid of He-Man and MacGyver. That one.

There is no rhyme or reason to it. Fluctuating hormones are a monumental ball-ache, MORE so to us poor damsels than to you dudes. The sooner you accept it, the sooner you can stop caring that your girlfriend turns into the Hulk once a month.

What the Hell’s Going on Anyway?

80% of the world’s population should know what menstruation is and why it happens. We’ll forgive children younger than 12 years old, population groups that inhabit far-flung regions of the globe and male Mormons who don’t really need to learn about these things. When one wife breaks down, he’s got four more on standby.

You may understand that menstruation is a cycle of egg production that permits us lady folk to reproduce. But what connection does that share with the nuclear fallout that happens in your household once a month? 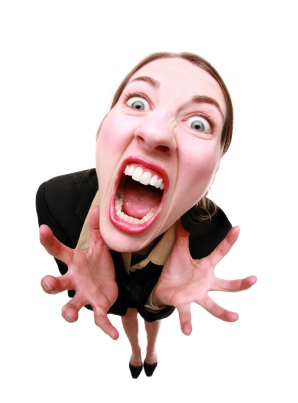 Estrogen is the main female sex hormone and interestingly enough is translated from the Greek word oistrus, which figuratively means “sexual desire” and literally “gadfly”. Don’t ask me why. My interest in etymology has its limits. The suffix –gen means “to produce”, so estrogen is a producer of sexual passion. Estrogen has a complex variety of influences on our moods. Some of the predominant effects include the increased release of serotonin, your brain’s “happy” juice. It also influences the production of endorphins, which is what makes you feel awesome when you eat chocolate, exercise or bonk someone attractive. Estrogen can even encourage nerve growth and protect existing ones from damage. So, estrogen is good. In moderation.

Progesterone is a steroid hormone produced by the adrenal gland, the ovaries and, if you’ve got a bun in the oven, in the placenta. This hormone’s job is to prepare the lining of the uterus – the endometrium – to become the warm, squishy and nurturing home for an egg and subsequent foetus in the ensuing nine months. Progesterone also serves to balance out some of the less desirable effects estrogen can have on the body, which includes an increased risk of developing uterine and breast cancer.

Testosterone, although known as a male hormone, is produced in small amounts by women’s bodies and its variability is too thought to play a role in turning your girlfriend into a slavering monster once a month. This hormone controls sexual desire and aggression. It’s what makes men drop onto all fours in the middle of a packed dance floor and do push-ups and it brings out the voracious sexual appetite in all the genders.

As yet, there is little scientific understanding as to whether or not women who become nuns are physically deficient in these hormones, hence their life’s dedication to being frigid. This research is pending and I greatly encourage any biologist out there to commence controlled experiments immediately. Some ideas might include substituting a nun’s annual flu vaccination with hormone replacement therapy and then locking her in a cheap motel room with Channing Tatum.

Considering some of the dubious Sapphic legends doing the rounds, you may want to repeat these trials using Olivia Wilde.

Battle of the Sex Hormones: A Play-by-Play

Day one of menses and your girlfriend wakes up with a multiple homicide between her legs. At this glorious time of the month, the levels of testosterone and estrogen in our sweet supple bodies are at their lowest. They then begin a slow and steady climb, which makes us feel sexier and better about life in general, in spite of the carnage going on in our wombs. So, asking a grumpy woman whether she’s “on her period” is as inaccurate as it is sure to get your eyes gouged out with a serving spoon. And it would SERVE you right *snort*. There’s a reason it’s called PRE-Menstrual Syndrome. When we are menstruating, we’re actually pretty nice. It’s what happens in the week before that has you sleeping on the couch.

During week two of our cycle, estrogen and testosterone continue their bold journey upwards, making us happy, excellent conversationalists, adventurous and dynamite lovers. Just like tequila. A spike in estrogen then boots an egg out of our ovaries and that’s when the trouble begins…

Subsequent to ovulation, estrogen and testosterone take a cliff dive and our levels of progesterone rise to peak during what is referred to as the “luteal phase”. If the egg is not fertilized by your boyfriend, husband or one-night stand, your body prepares to rid itself of potential mini-you and the production of this hormone joins estrogen and testosterone off that cliff like a lemming. Progesterone makes you hungry, sleepy and forgetful; it makes you want to settle down, nest, get married and feel safe. It can even cause you to slur your speech like a drunkard.

This complex and violent surge and downswing of sex hormones causes a mutation of moods, which surge and downswing just as violently. A drop in estrogen and correlating rise in progesterone makes us cry while watching Pocahontas. It also makes us want to poison your food with arsenic. Even that might be too subtle. 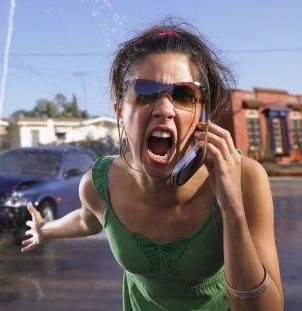 “You left your socks on the bedroom floor again?? Why don’t you just take a shit all over my leg!! Jesus H. Christ!!

Thankfully, by the second half of week three, estrogen begins to climb back up again, making your chance of getting laid that much better. Don’t blame your girlfriend for faking it though… increased levels of progesterone don’t make us feel very sexy. Now, in fact, would be the time to ask her to marry you and then spend the night spooning her.

If you thought it was over, you’d be wrong. In the final week of our cycle, all three hormones commit suicide again and the premenstrual symptoms hit full force like a category 5 hurricane. At this time, we are at our most homicidal. You might want to invest in a sleeper couch or horse tranquilizers.

It’s Not All Bad…

The entire point of menstruating is to reproduce and while it tends to have its downsides – bleeding from your hoo ha begin a major one, terrible mood swings being another – it also has it perks. The hormonal cycle a woman experiences takes her up slippery sex mountains of desire and brings her crashing down into yawning chasms of despair and chocolate craving. If your most intimate parts resembled the scene of a hit and run, you’d also get a little crabby.

Don’t regard your lady’s period as you might the blood-engorged elevators opening in the film adaptation of “The Shining”. She feels just as confused, angry and upset by her own fluctuating hormones as you. Just throw a bar of chocolate at her and she’ll pipe down. And if you find any bottles labelled “As” in the kitchen cupboards, you might want to avoid any home-cooked meals in the week prior to her period.

There is a brilliant ad doing the rounds on the Internet and apparently it was the brainchild of some Russian marketer. The advert shows two gorgeous buxom young women – one blonde, one brunette – walking in slow motion along the beach, tossing their hair around, boobs bouncing, staring intensely into the distance and generally being ridiculously sexy. Both of them head into the crashing waves of the sea. Suddenly, the brunette gets viciously body slammed by a gigantic shark, which thrashes the water into a soup of white foam and crimson blood.

The ad was for tampons. Brilliant! Check it out Here…

I was terribly sad to see the brunette go.

What I don’t understand is why this advert was never aired on the television. Considering mail order brides, vodka, Mila Jovovich’s chronic nudity in the Resident Evil Octilogy and the language in general (which is just plain sexy no matter which way you spin it), I would NEVER have pinned this vast country to be conservative. Although, the recent gay bashing furore is definitely a red flag, excuse the pun.

Half the world’s population bleeds once a month, so why is this an issue that needs to be censored? Because women really are monsters around this time of the month and if you’ve ever seen M. Night Shayamalan’s “The Village”, you will know that monsters are “those of whom we do not speak…”

Having said this, with a little understanding, chocolate and red wine, you can sail under the radar of our homicidal tendencies and endear yourselves to us further. We may go 50 shades of cray once a month, but we eventually get over it. Also, it would help if you looked like Ryan Gosling.